Mark Twain once said, “If you don’t like the weather in New England now, just wait a few minutes.”  While a few minutes is perhaps an exaggeration, it has been very changeable here.  One day an ice storm, coating every tree twig and bush berry, and the next day 45 degrees, melting it all.  The nearby river freezes and melts and has frost heaves that create icy wonder.

Although the pace of life seems to accelerate, New Hampshire is a place of many traditions that create a time to pause, reflect, and enjoy.  One such custom is having a Holiday Parade sometime during the first weekend in December.  Exeter has been having their parade for the past 60 years. 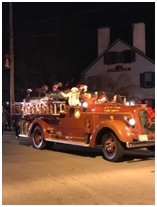 This year’s parade had marching bands, performers in costume greeting the crowd and passing out candy, and floats as well as fire trucks from all surrounding communities.  The rules to join the parade were posted on the town’s website.  The final rule reads, “Remember, there is only one Santa Claus” and it’s true, there was only one Santa and he rode on the last float.  The parade is a well-loved event and the evening was perfect for it.  The streets were crowded with on-lookers, the air was crisp and not too windy, and there was no snow to trudge through.

Have you ever heard of Pickity Place in Mason, NH?  Neither had I and with a name like that, I needed to investigate. What I found was a gift shop and organic restaurant (an excellent 5-course set menu) housed in a little red cottage built in the latter half of the 1700’s.  The house became the model for the illustrations by Elizabeth Orton Jones of Little Red Riding Hood (1948) and one of the rooms is dedicated to a reproduction of the wolf in a bed, pretending to be grandma.  Also, local lore has it that Samuel Wilson, a meat supplier born in Mason, was the inspiration for the Uncle Sam character we all recognize from posters.

Although Puxsutawney Phil has predicted 6 more weeks of winter, perhaps there will be another beautiful ice storm…or not!